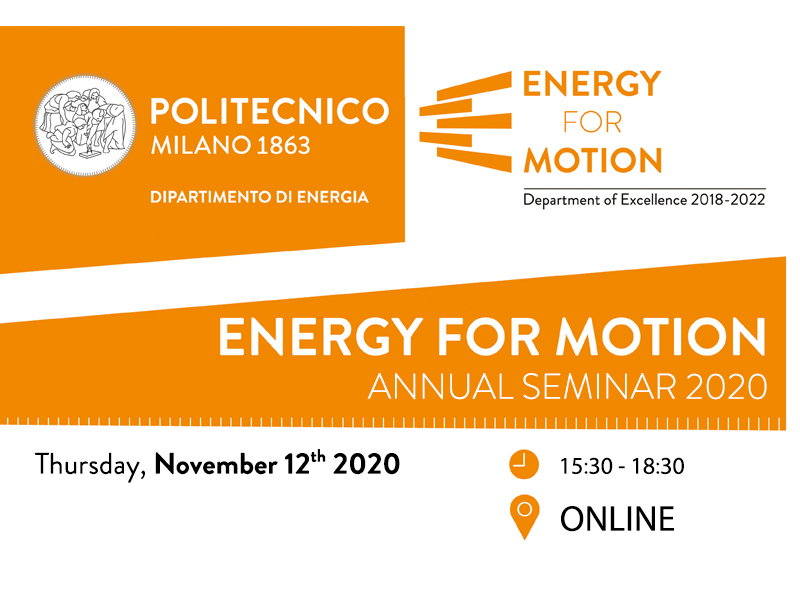 16:30-17:00 – Energy transition and mobility at the 2020 turning point
The vision of our Academic Advisors
Andreas Züttel Professor of Physical Chemistry. Director of the Laboratory of Materials for Renewable Energy, École Polytechnique Fédérale de Lausanne
Stefano Passerini Professor at the Karlsruhe Institute of Technology. Director of the Helmholtz Institute Ulm

Aleksey Yezerets holds a Ph.D. in Physical Chemistry from the Mendeleev University of Chemical Technology, Moscow, Russia. After post-doctoral experiences at the Northwestern University of Evanston (Illinois) and the Mendeleev University (Russia) and visiting research period at Università degli Studi di Milano (Italy), he joined Cummins. At Cummins, a global power leader with a 100-year history of innovation, Dr. Yezerets leads the international Advanced Chemical Systems & Integration Team, responsible for applied science guidance and support for electrification and emission control products across their life cycle. He coordinates a portfolio of internal and collaborative programs with industrial and academic partners worldwide. He has contributed to the success of Cummins in the emissions arena as a member of the team that launched several generations of diesel and natural gas emission control products, including the award-winning system that was the first to meet the 2010 U.S. EPA regulations, three years ahead of competition. He maintains currency in his field through active engagement in professional and graduate education activities. He has co-authored 37 patents and 90 peer-reviewed publications, with over 2500 citations, and has presented numerous invited lectures. His professional impact has been recognized by awards from Cummins, SAE, ACS, AIChE, NACS, Catalysis Club of Chicago, and R&D100. He is an SAE Fellow.

Paolo Pollesel received a degree in industrial chemistry from the University of Milan and in 1990 he joined Eniricerche, the former corporate R&D company of the Eni Group, where he was involved in several projects mainly in the field of refinery and petrochemicals. From 2007 to 2012 he was in charge of the R&D Downstream Process Technology Department in the Refining & Marketing Division and in 2013 and 2014 he worked as Technology Planning Manager in the Corporate R&D Department. In 2014 he became Downstream Laboratories Vice President at Eni research center in San Donato Milanese. In January 2016 he became part of the Eni Energy Transition Program, focused on gas technologies, with main responsibility on H2S capture and conversion technologies. Since June 2018 he is Vice President for Renewable Energy and Environmental R&D and he is in charge of the Novara research center. He is inventor of more than 30 patents and co-author of about 70 scientific papers. He was the chairman of the Group of Catalysis of the Italian Chemical Society in the period 2015-2017.

He joined the Enel Group in 1997 as Head of Administration and Management Control at Enel S.p.A., contributing to the company listing on the New York and Milan Stock Exchan¬ges. Mr. Venturini later became Head of Internal Audit within Enel’s Distribution and Market Division, and subsequently, Head of Sales Administration within the same division. In 2009, he was appointed Head of Finance in Enel Green Power. Afterwards, he worked at Enel Green Power North America, first taking on the role of Head of Business Development and later, in 2011, as Head of the North America Area. In May 2014, he was appointed Chief Executive Officer and General Manager of Enel Green Power, position that he held for 3 years making the company one of the best-positioned and more successful operator in the renewable energy sector at the worldwide level.

In May 2017, Mr. Venturini has been appointed Head of E-Solutions, then renamed Enel X, a new global division within the Enel group, which has been created to provide new digitalized products and value added services, such as energy efficiency, demand response, electric mobility, IoT and optical fiber at both residential and C&I level.

Andreas Züttel received his Engineering Degree in Chemistry from the University of applied science in Burgdorf, Switzerland in 1985 with a diploma work on a new method for the investigation of reaction kinetics. After an internship at Dow Chemical in Terneuzen in the Netherlands where he worked on the 3D network of polymers, he studied Physics at the University of Fribourg (UniFR), Switzerland and received the diploma in Physics in 1990. He continued with a PhD project on hydrogen in metals in solid state physics in the group of Prof. Louis Schlapbach and graduated Dr. rer. nat. from the science faculty of UniFR in 1993. He was awarded an SNF Post Doc stipendium and went to AT&T Bell Labs in Murray Hill, New Jersey, USA in 1994 where he worked on optical properties of oxides as well as amorphous metal hydrides. In 1997 he became a Lecturer at the Physics Department of UniFR where he worked as a group leader on metal hydrides, carbon nanotubes and metallic clusters. In 2003 he became an external professor at the Vrije Universiteit Amsterdam in the Netherlands and 2004 he submitted his habilitation in experimental physics at the science faculty UniFR and became a Prof. tit. in the Physics Department of UniFR. 2004 he was elected the President of the Swiss Hydrogen Association „HYDROPOLE“. In 2006 he built up and directed the section “Hydrogen & Energy” at Empa Materials Science & Technology in Dübendorf, Switzerland. He was a guest Professor at IMR, Tohoku University in Sendai, Japan in 2009 and visiting Professor at Delft Technical University in the Netherlands in 2012. Since 2014 he is Full Professor for Physical Chemistry in the Institut des Sciences et Ingénierie Chimiques, Ecole Polytechnique Fédérale de Lausanne at (EPFL), Switzerland and director of the Laboratory of Materials for Renewable energy in EPFL Valais Wallis in Sion where he built the small-scale demonstrator for Sion which demonstrates the complete conversion chain from solar energy to hydrocarbons. Furthermore, he is co-founder of the start-up company GRZ Technologies Ltd. which produces large scale energy storage systems and hydrogen compressors based on metal hydrides.

Since 2014, Stefano Passerini is professor at the Karlsruhe Institute of Technology and Head of Group Electrochemistry for Batteries of the Helmholtz Institute Ulm. His research activities are focused on electrochemical energy storage with special focus on improving the sustainability of high-energy batteries. Prof. Passerini co-author of more than 500 papers (Source:Scopus; H-Index: 81; > 24,000 citations), a few book chapters and several international patents. He has been awarded with the 2012 Research Award of the Electrochemical Society Battery Division, the ISE Fellow status and the membership of the Leopoldina Akademie. He is the European Editor of the Journal of Power Sources.

Enrico Tronconi is Professor of Chemical Engineering at Politecnico di Milano (Dipartimento di Energia). He holds degrees in Chemical Engineering from Politecnico di Milano and from the University of Delaware (USA). His main research interests are in the area of Catalytic Reaction Engineering, with emphasis on industrial processes for energy conversion and environmental protection. The general aim of his research is the elucidation of fundamental and applied aspects of catalytic technologies, and the development of new catalyst/reactor concepts for process intensification. In particular, he has explored the engineering features associated with the application of novel structured catalysts and reactors: for these studies he received the Federchimica National Award in 1995, and an Advanced Grant from the European Research Council in 2016. He has also extensively investigated DeNOx aftertreatment technologies for vehicles. On this topic, he has co-authored a paper that received the Glenn Award from the American Chemical Society Division of Fuel Chemistry in 2005. His work on the Selective Catalytic Reduction of NOx emissions from Diesel engines, in collaboration with Daimler AG, has contributed to the development of the BlueTec technology, commercialized on Mercedes-Benz vehicles since 2005. On this topic, Enrico has published many highly cited papers and one edited book: “Urea-SCR Technology for deNOx After Treatment of Diesel Exhausts”, Springer, NY (2014) (with Isabella Nova). Enrico has been and is Principal Investigator of several public and industrial projects in the fields of heterogeneous catalysis and chemical reaction engineering, often in collaboration with leading Companies.

Stefano Campanari holds a degree in Mechanical Engineering and a PhD in Energy Sciences at Politecnico di Milano, Italy. He has been Researcher, Associate Professor, then since 2018 Full Professor of Energy Systems at the School of Industrial Engineering of Politecnico di Milano. His main research activities are related to advanced power cycles, hydrogen production, fuel cells and CO2 capture, as well as to distributed cogeneration power plants. Author of over 150 publications on international journals and congresses, with H-Index 30, and three books related to the research activity. Scientific responsible of the Lab of Micro-Cogeneration and Energy Conversion at the Department of Energy, Politecnico di Milano. Recipient of six international best paper awards at ASME Turbo Expo, where he is member of the IGTI committees “Cycle Innovation” and “Industrial & Cogeneration”. Editorial board member of the Elsevier Science journal ‘Applied Energy’.

Maurizio Delfanti CEO of RSE (“Research on the Energy System”, public company owned by the Italian national grid operator), and Professor on leave of Electrical Systems for Energy at the Politecnico di Milano. During twenty years at Politecnico, he was responsible for numerous research and consultancy activities for the Italian Regulatory Authority for Energy, Networks and the Environment (ARERA), for electrical industries and utilities, and president of various committees and technical commissions on regulatory activities in the areas of smart grids and energy storage. Author of over 100 publications in the field of technologies and management of electricity networks in the most prestigious scientific journals in the sector.